For the latest on flights and Hurricane Irma, please check with your airline. We also encourage you to follow us on Twitter for updates. 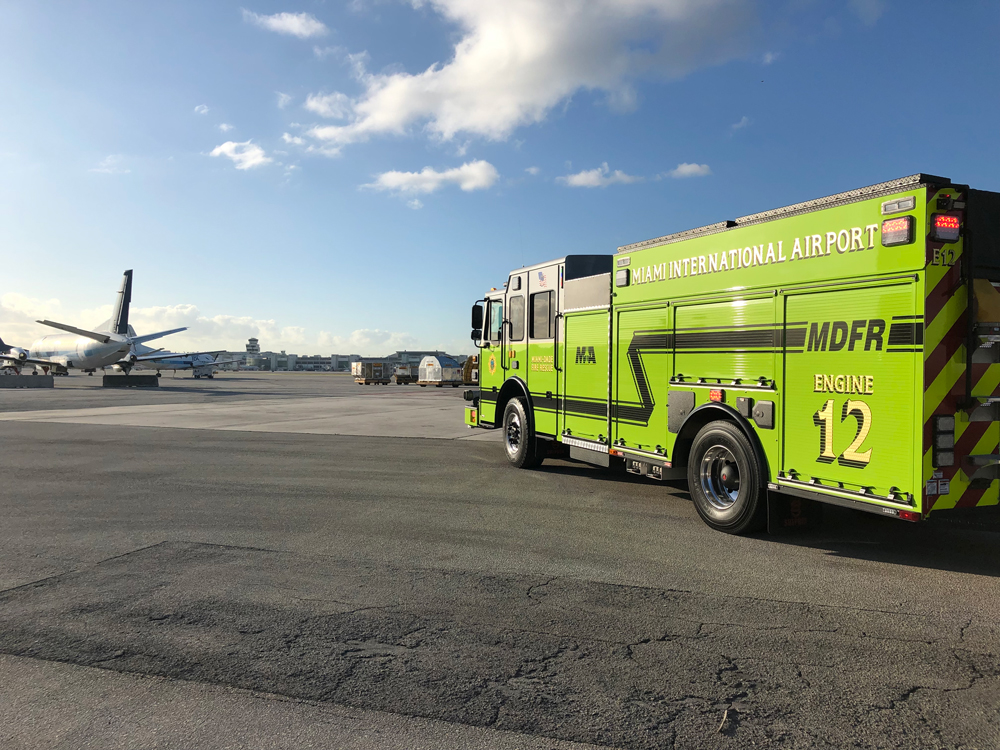 The primary purpose and mission of the Aviation Fire Rescue Division (MDFR) is to provide state-of-the-art fire rescue services to the passengers, employees and visitors of Miami-Dade County airports and their surrounding communities. The Aviation Fire Rescue Division activities include mitigation of, and response to, structural and aircraft fires, as well as response to medical emergencies, fuel spills, incidents of terrorism, hazardous materials spills, bio-chemical threats, radiological exposures, and natural disasters.

In order to maintain the highest level of readiness, the Division engages in continuous education and training programs. The Division also develops and maintains dynamic disaster response plans for every potential hazard that may be present in highly complex environments such as Miami-Dade County airports.

The Aviation Fire Rescue Division encompasses four major service areas, which include Airport Operations, Training and Safety, Fuel Safety Operations, and Aviation Life Safety (Life Safety Code Enforcement). The Division is responsible to both the Miami-Dade Fire Rescue Department and the Miami-Dade Aviation Department and responds to communities that surround the airport on a Mutual Aid System.

Training & Safety
The MDFR Aviation Division's Training and Safety Bureau has the responsibility of ensuring that all Aviation Division uniformed personnel receive all required ARFF training. Personnel assigned to the Aviation Division must receive and maintain training which meets FAA requirements as mandated in Title 14 CFR Part 139, Certification of Airports, and defined in FAA Advisory Circular (AC) 150/5210-17D, Programs for Training of ARFF Personnel. This is accomplished by training personnel in the following categories:

In addition to the mandatory training listed above, the Aviation Division's Training and Safety Bureau researches and provides training at the Fuel Tank Farm located at MIA, the Miami Intermodal Center (MIC) Rental Car Center, as well as Kendall-Tamiami Executive and Opa-Locka airports. This bureau also maintains the external defibrillator program at the MIA terminal, as well all associated training to Miami International Airport (MDAD) staff. This bureau provides training to MDFR District Operations units, which respond to the airport in emergencies. The Aviation Training and Safety Bureau is also responsible for updating all current Standard Operating Procedures (SOP). This includes identifying and developing new SOPs as dictated by technological changes as well as changes within the aviation industry. All these functions are accomplished by establishing and maintaining relationships with all entities at all airport facilities.